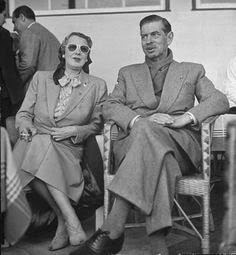 King Carol II [Carol von Hohenzollern-Sigmaringen] and M. Lupescu’s stay in Portugal, where they arrived in March 1941, caused some distress to Oliveira Salazar because he was the heir of the legitimate branch of the monarchy, dethroned in 1910.

But he lived here in Vivenda Girassol, becoming one of the “golden crowns” that took our country as a quiet exile.

In his memoirs [Ambassador with a Special Mission, 1946], the British Ambassador in Madrid, Sir Samuel Hoare, writes how delighted he was when, after being confined despite the promises of Serrano Suñer, the Spanish Foreign Affairs Minister, he knew that the Monarch had escaped from Spain.

Allegedly, everything had been previously arranged through contacts between the Romanian Ambassador and the Portuguese Foreign Affairs Ministry.